Local beekeeper Alfred Brigham, 38, is keeping his family tradition alive in order to do the same for the Island’s bee population.
Beekeepers in western countries have been reporting the die-off of honeybees for several years. In addition to his hives on his property on Smith Street, he said he helps out the other Islanders who keep bees with his beekeeping equipment and knowledge. There are a lot who do, he said. With the decline in the honeybee population in many parts of the world, “A lot of people are getting bees on the Island” to do what they can to reverse the trend, he said.
“It’s good for the area, it increases the numbers,” he said. 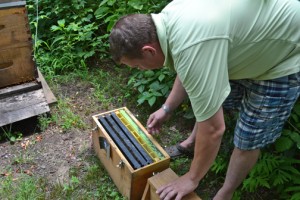 The abnormally high die-off of honeybee colonies in recent years in Europe and the United States has been called “colony collapse disorder.” Research so far has failed to determine the cause of the disorder. Some believe an increased use of systemic pesticides, which are planted with seeds and are contained in plants as they grow, may be a factor.
Mr. Brigham, whose brother Harry, 35, also tends to the Brigham bees, said he had lost one hive in his beekeeping career. It was about two years ago when one day he found the bees gone — a typical scenario for CCD, although there’s no way to know for sure that his bees’ disappearance can be blamed on it.
A member of the Long Island Beekeepers Club, he said that some beekeepers are treating their honeybees for viruses and fungi. He tries not to medicate his bees except once a year with a fungicide, which he adds to the sugar water that he feeds to the bees.
Mr. Brigham said the family tradition was started by his grandfather, Alfred Kilb, who was a master beekeeper with hives all over the Island. Mr. Brigham and his wife Rachel keep the tradition despite their busy lives as teachers and parents of three children, Alfred Jr., 5, Elsie May, 3, and Lily, 9 months. Ms. Brigham is a teacher at the Shelter Island School and Mr. Brigham is a teacher in the Hampton Bays district. Mr. Brigham now adds to his community responsibilities his new position on the Shelter Island School Board of Education.
With the recent addition of the Island’s Saturday farmer’s market, the Brighams have a new outlet at which to sell their honey as well as other products made by Rachel, such as beeswax candles, lip balm and skin cream. She is also from a family with a long history on the Island, the  Reylek-Clark family — that’s the Mashomack Clarks. Her father, Robert Reylek, was very involved in the local educational system, serving on the school board for 21 years, many as board president. Ms. Brigham said she was taught how to make beeswax candles from her grandfather-in-law, the late Alfred Brigham.
Mr. Brigham wasn’t sure of the answer when asked how many hives he keeps. He estimated he has about 10 around the Island.
Winter survival is another challenge for the honeybees, which stop foraging when temperatures drop below 50 degrees. They crowd into the central area of the hive around the queen bee. The worker bees rotate through the cluster from the outside to the inside so that no bee gets too cold; they consume their stored honey to produce body heat. Mr. Brigham said he wraps his hives in tar paper to help them to retain warmth.
The Brighams’ bees gather pollen in the summer from flowers in the neighborhood — mostly clover growing within the grass. Mr. Brigham joked that the clover, when it flowers, is an excuse not to cut the lawn. The bees may travel up to three miles foraging for pollen.
Mr. Brigham said bees might sting someone who approaches their hive directly, but stinging is not usually a problem. The Brighams’ children play in the yard where there are also goats, chickens and a vegetable garden. The Brighams’ honey stand is in front of their house on Smith Street, the same house that Mr. Brigham grew up in. The stand provides enough revenue to keep the hobby going and the bees alive.
Some local residents have been consuming the Brighams’ honey in the belief it helps prevent and control seasonal allergies. Mr. Brigham noted one such local person, Dorothy Ross, has purchased the honey for that purpose “forever,” beginning with his grandfather’s honey.

Back to Your Roots: Honeybee beginning

The countdown is here. Spring is around the corner. You can feel it with the readiness of the tree...

Back to Your Roots: One packet of seeds

Who would have thought that seeds from a single packet would set the tone for the work I do...