A new president, two new board members, a new superintendent and new school business leader were all there at Thursday evening’s annual Board of Education re-organizational meeting.
The board members unanimously chose Dr. Stephen Gessner as the new president, replacing Rebecca Mundy, who did not seek reelection to the board thjis year. Also taking the oath of office were new board members Elizabeth Melichar and Alfred Brigham, who join members Tom Graffagnino, who was re-elected vice president, and members Mark Kanarvogel, Kathleen Reilly and Linda Eklund. who was re-elected to the board in May. Also on hand were District Clerk Deborah Vecchio, who was reappointed for the school year. New Superintendent Dr. Michael Hynes and new School Business Leader Jessica Mack also joined the board at the meeting.
Dr. Gessner, who has served on the board for two years, said he was “delighted to be taking on this new responsibility and to be working with our remarkable new superintendent.”
Dr. Gessner said he was proud of what the board had accomplished. He credited Ms. Mundy for her “terrific leadership.” He said of Ms. Mundy, “To be succeeding her gives me great pause but I will be inspired by her strength, balance and sensitivity.”
Dr. Gessner said that, for him, “Student achievement must always be foremost in our minds and we must be working hard to be sure we are preparing our students for success.”
Dr. Gessner is a clinical psychologist who has worked in a number of private and public settings, specializing in children and adolescents. He also is the president of the Council for American Culture and Education, a non-profit, international educational organization. 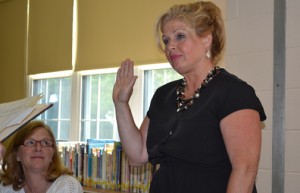 Vice President Thomas Graffagnino begins his fourth year in that position and fifth year on the board. He said he was looking forward to working with the new superintendent and business leader as well as the newly elected board members. Mr. Graffagnino has two years left on his second term. He said that once negotiations are settled with teachers and staff, he would work with the new administration to achieve greater academic performance, “not just for college-bound high school students but for all students k-12.”
The newly formed board made appointments and approved many agenda items for the 2011-2012 school year. All votes were unanimous.
District Clerk Deborah Vecchio noted the holidays and vacations that fall on Mondays in order to finalize the calendar for the school year’s monthly Board of Education meetings, the dates of which were approved.
School personnel appointments were made for coaches, co-curricular positions, after-school detention, home instruction and athletic chaperoning.
Coaching appointments
Appointments were approved with discussion and notation that the salaries approved were based on the current contract.
Coaching appointments were as follows:
Rick Osmer as both the athletic director at $5,122 and the junior high boys basketball coach at $2,563; Michael Mundy as the varsity boys basketball coach at $5,549; Peter Miedema as both the varsity girls basketball coach at $5,549 and the junior varsity baseball coach at $4,269; Susan Warner as the junior varsity girls tennis coach at $3,275; Karen Gibbs as both the junior varsity girls volleyball coach at $4,269 and junior high boys volleyball coach at $2,347; Brian Doelger as the junior varsity girls basketball coach at $4,697; and Phyllis Power as intramural golf coach at $1,091.67.
As part of the final stage of consolidating and updating the school’s policy manual, the board approved the deletion of superseded policies. The board now has only one manual which will be put on the school website for public viewing as the next step.
Superintendent Dr. Hynes said that he was eager to work with the new board and announced that he was working on the first draft of a 100-day plan, which will be complete by the end of August. He invited board members and school staff members to attend one of two gatherings he has slated for the community to meet him. Both in the school library, the first meet-and-greet took place on Monday at 6:30 p.m., and the next will be on Monday, July 18 at 9 a.m.

The School Board met Monday night for the last formal session with President Rebecca Mundy presiding. The board’s Vice...

The deadline for submitting petitions to run for a seat on the School Board is 5 p.m. on April...

The School Board accepted K-12 music teacher Melissa Meadows’ resignation Monday night at their regular meeting. Her resignation is...

The Shelter Island School District will have to cope with increased costs in the 2011-2012 school year from state-mandated...