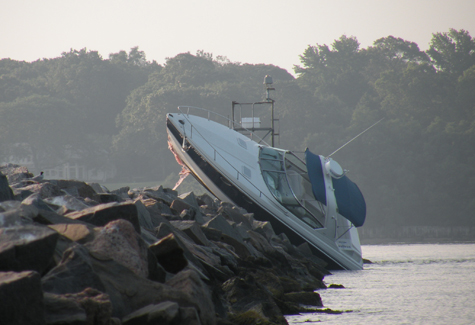 A Greenport man was arrested on drunken boating charges early Saturday after he crashed his boat into the Greenport breakwater — a rock jetty that juts into the bay toward Shelter Island, police said.

Herbert Israel, 23, was traveling east out of the Greenport Harbor and struck the rocks shortly after 2:40 a.m., Southold Police said.

Mr. Israel, who was traveling with three other male passengers in their early 20s, was the only person injured, police said. He was taken to Eastern Long Island Hospital and treated for minor injuries, officials said.

Mr. Israel was charged with boating while intoxicated and is awaiting arraignment in Southold Town Justice Court, officials said.

Barbara Edwards Delsman, who has vacationed in Greenport for over 35 years, said that while it was startling to see the boat up on the breakwater, she wasn’t too surprised because accidents are known to occur in that location.

“When I saw it I was relieved no one was seriously hurt or killed,” Ms. Delsman said. “Accidents aren’t infrequent at the breakwater.

“People have been killed there before.”

She said police told her the driver was “pretty bloodied up.”

A rehearsal diary: Blocking on the fly while preparing for ‘Matilda’

“Your track coach will thank me for this,” said John Kaasik to the cast of “Matilda” as they ran...