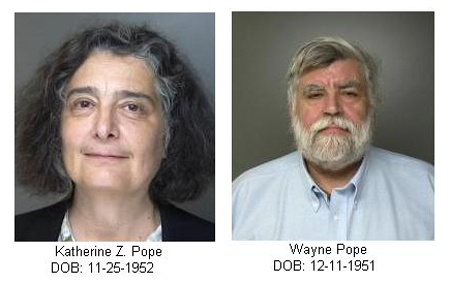 A former Shelter Island town justice and her husband pleaded guilty Nov. 15 to different charges to end their embezzlement trial in Riverhead.

Prosecutors alleged that the couple stole more than $1 million over a four-year period from an elderly Water Mill woman who suffered from dementia.

The couple was indicted in August 2009, one month after the victim, Mary Abbott Estabrook, died at the age of 89. Ms. Pope was no longer on the bench at the time.

Mr. Pope allegedly obtained power of attorney from the victim while he worked as a handyman in her home. He then wrote checks to benefit himself, according to the DA’s office.

Ms. Pope, who served as a town justice on Shelter Island from 1998 to 2002, was initially charged with first-degree grand larceny and two counts of first-degree identity theft. The ID theft charges are related to telephone transactions made in 2006, when Ms. Pope allegedly identified herself as Ms. Estabrook and liquidated more than 12,000 shares of stock, according to the prosecution.

Mr. Clifford said Ms. Pope’s other charges are considered “covered by the plea,” meaning her sentence won’t include them but they’ll remain on her criminal record.

The Shelter Island Town Board appointed Ms. Pope, a Democrat, in 1998 to fill a positions in Justice Court that had been left vacant by the death of Judge Howard Cronin. That November, she ran against Garth Griffin and was elected to serve out Judge Cronin’s four-year term. She ran for re-election in 2002 and was defeated by Republican William A. Sulahian.

50 YEARS AGO IN HISTORY The future King of England Prince Charles joined the Cambridge Footlights and tread the...

A former Shelter Island town justice and her husband pleaded guilty November 15 to different charges to end their...