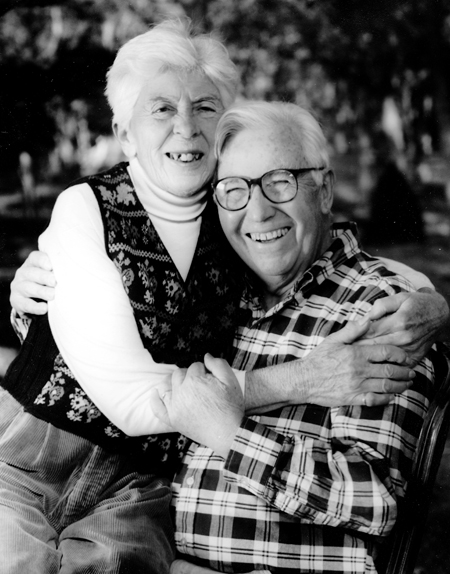 Alex Garcia, MD died at Peconic Bay Hospital on February 5, 2012 after a brief illness. Alex was over 92 and a half at the time of his death. He was predeceased by his wife of 62 years, Helen-Ann Garcia MD. Helen-Ann died in Nov. 2007 of Alzheimer’s disease.

Alex was born on July 3, 1919, to Pilar Prieto Garcia and Alejandro Garcia of Harlem, New York. After graduating from City College, Alex attended Long Island College of Medicine, where he met Helen-Ann. Helen-Ann often said, “He married me after dating all the other girls in our medical school class!”

The war effort compressed medical school into three years and the Garcias were married after graduation in 1943. During the war, Alex served in the Army at Walter Reed Medical Center.

Their first home together was in Port Washington, New York. In 1952, the Garcias bought a small cottage in Southold to spend weekends and summers with their young son, Alec. After the Southold cottage was nearly washed away by Hurricane Carol, Alex began looking for safer property.

In 1958, he and his dad drove to Shelter Island looking for land and happened across the Bronander house on Ram Island. After viewing the spectacular setting and peeking through the windows of the locked house, Alex’s father said “Buy it!” Alex made an offer before Helen-Ann even had an opportunity to see it.

At their Port Washington home, Helen-Ann was a much-loved general practitioner who made house calls and saw patients in the small office attached to the house. Alex practiced orthopedic surgery and joined the faculty of Columbia University College of Physicians and Surgeons, eventually being named chairman of the Department of Orthopedic Surgery, Columbia University Medical Center. He remained in that role until his retirement in 1983.

After retirement, he continued to serve the Shelter Island community through his involvement in Mashomack Preserve, Ram Island Association, Friends of the Library and many other civic organizations. He endeavored to improve life for his neighbors; it was well known about town that his door was always open if a medical consultation was needed. Local residents involved in animal rescue brought raccoons and other animals in need of surgery to Helen-Ann and Alex for care. Over the years, they stitched and nurtured many orphaned raccoons back to health.

In November of 2000, Alex required open-heart surgery. His valve replacement surgery took place on Election Day. His son relates the story that, upon awakening, one of Alex’s first questions was, “Is George Bush the president?”, to which Alec and the world had no immediate answer. He was happy with the final result, having voted for Bush. Alec and wife Jodi spent five months that winter on Shelter Island to be near Alex during his convalescence. At the time, Alex was nursed back to health by Kasia Lisek, who single-handedly cared for both Helen-Ann and Alex in their final years.

Alex is survived by his son and daughter-in-law, Alec and Jodi of Palos Verdes, California; nieces Vicki Maryon, Gail Donohue, Janice Garcia, Lynn Dutrey, Carol Landry, and nephew Hal Proskey, III. He was predeceased by his brothers Ed and Frank.