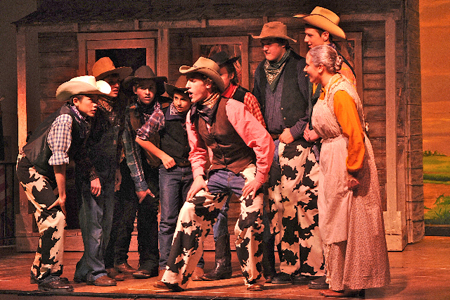 Two stars of Shelter Island School’s recent production of “Oklahoma” have been nominated for East End Arts 2012 Teeny Awards for their performances. Nominees were chosen by a panel of volunteer judges who attended and reviewed productions at all 15 participating schools.

The awards will be given at ceremonies at Eastport-South Manor High School on Sunday, June 10.

The Parrish Art Museum in Water Mill is hosting its 2014 Student Exhibition, “A Celebration of Imagination,” featuring the...

Letters to the Editor: Deer management

To cull or not to cull To the Editor: Deer management is a hot topic here these days, but...

Shelter Island School officials have announced that due to the forecast of the snow not changing over to...

Could the Shelter Island School District offer a pre-kindergarten program in September?

Love for the children of Grenada

Islanders Kimberly Atkins and Mary Boeklin are teaming up to collect new or gently used clothes, toys and books...