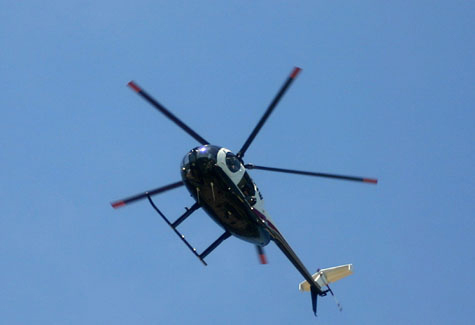 “Since when did helicopter pilots take over the town and do what they want?” demanded Ruby Jackson at a packed meeting last week about the racket being made by helicopters flying in and out of the town-owned East Hampton Airport.

“We are victimized!” declared Ms. Jackson.

“You have to stand up and take back our town and ban this unnecessary traffic,” said Ms. Jackson, an artist from Noyac, directing her comments to the public officials present. “It is destroying our place.”

The choppers that fly between Manhattan and East Hampton have made the East Hampton Airport the biggest noisemaker on eastern Long Island. The Hamptons-bound helicopters, with passengers able to pay a hefty fare of up to $2,000 each round-trip, cruise loud and low over Nassau County, western and central Suffolk County and then the East End. Especially hard hit in recent times — because of a change in route to and from the field — have been Noyac, North Sea, Bridgehampton and Sag Harbor.

“What is currently in place is demonstrably unfair,” said Mr. Bishop.

But he stressed that what can be done about the noise is unfortunately limited. He spoke of seeking “voluntary” adjustments from helicopter pilots and the companies running the choppers.

“All we have is reason and persuasion,” said Mr. Bishop. “If helicopter pilots want to give us one of these” — he made a gesture with his hand — “they can. There’s not a controlling authority.”

That’s what led to Ms. Jackson’s declaration “to stand up and take back our town and ban this unnecessary traffic.”

There are numerous ways it could be done.

Because of the chopper noise situation, the Suffolk County Legislature in 2009 passed a law making it illegal for anyone to fly a helicopter in a manner that “creates a hazard or undue hardship for persons and property on the surface.” It was authored by Legislator Edward Romaine, whose district includes Shelter Island. “Flying over somebody’s house at 500 or 1,000 or 1,500 feet would be creating an undue hardship for persons and property,” says Bill Faulk, Mr. Romaine’s legislative aide.

The administration of former Suffolk County Executive Steve Levy “declined to enforce the law and we haven’t heard anything from the Bellone administration to our request about enforcement made earlier this year,” he said. The law comes with a $1,000 fine per violation.

It needs to be enforced.

Suffolk’s towns and many of its villages have ordinances to protect people from noise that is louder than a certain level of decibels. As writer Julie Penny of Noyac said at the meeting last week, Southampton Town has “a noise code that is being breached” by the aircraft heading to and from East Hampton Airport.

It, too, needs to be enforced.

Pat Trunzo, a board member of the Wainscott-based Quiet Skies Coalition (quietskiescoalition.org), said at the meeting, “The solution is to tell the town [of East Hampton] to stop taking FAA money.” Indeed, if the town does not pursue a now pending Federal Aviation Administration grant, as of the end of 2014 it can, at long last, “get this airport under control,” said Mr. Trunzo. The “solution to pollution” from aircraft noise is not, he said, “dilution” — spreading the racket, as the airport’s new summer control tower has done — but getting at its source.

The problem in East Hampton (through many administrations) is the coziness of some town officials with flying interests. Interestingly, the much-heralded “hotline” the town arranged for people to call to complain about the chopper noise is operated by a Port Jefferson-based company, “PlaneNoise,” headed by Robert Grotell. Mr. Grotell’s other role is “special advisor” to, and a leader of the Eastern Region Helicopter Council, the entity that represents the helicopter pilots and “operators” that use East Hampton Airport.

On the level of the federal government, the claim it can’t take strong action to deal with a tiny group that is victimizing the overall population with noise pollution is hard to believe. If the FAA won’t do it, then the U.S. Environmental Protection Agency can.

As Ms. Jackson said, every public official needs to “stand up” and fight — and fight hard — for the people. Before the word “official” comes the word “public.” That’s what government leaders are supposed to be about: representing the people not special interests.