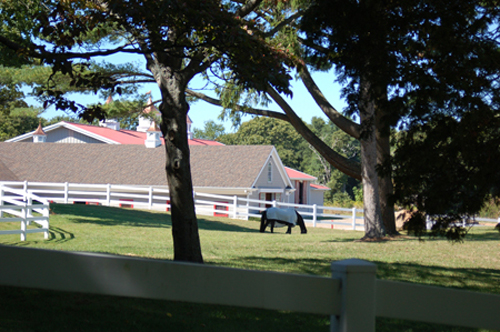 Twelve years after Ellen Lear and Pieter Ruig won a hard-fought battle before the Shelter Island Zoning Board of Appeals to create Paard Hill Farm on Ram Island Road, the horse farm is no longer operating and the property is for sale at a $7.95 million asking price.

“We just decided to sell,” Mr. Ruig said, declining to elaborate on the decision. The Corcoran Group is handling the sale and Senior Vice President Penelope Moore said there is a possible buyer.

“It’s a strong number” and an “all cash” deal that Corcoran may have in hand, Ms. Moore said in a telephone interview Tuesday morning. But in the world of real estate where nothing is certain until the closing, she’s still showing Paard Hill Farms.

She calls the property “a jewel in the crown on Shelter Island.”

To secure ZBA approval for a commercial equestrian operation in a residential neighborhood in August 2000, the couple agreed to transfer 29 of the 36 acres of the site to either Shelter Island Town or the Peconic Land Trust to assure it would never be developed. Peconic Land Trust now holds the development rights on that acreage but the buyer would still have exclusive rights to use it for pasture or other farm uses in perpetuity, Ms. Moore said.

The 29 acres include 20-foot wide trails, she said. The property overlooks both Gardiners Bay and Coecles Harbor and includes deeded water access to the harbor.

Among those who have considered the purchase is someone who wanted to keep sheep and run a home-based yarn business; a person with an “exotic car collection” who thought the site would make a good home for his autos; and a person who already lives on Shelter Island and loves the land. “And they don’t even have horses,” Ms. Moore said.

When the property sells, it will revert to residential status, Ms. Moore said, although the preserved acreage could not be developed. If the buyer wanted to operate a horse farm, he or she would have to go to back to the ZBA for a variance as Ms. Lear and Mr. Ruig did. But she speculated that neighbors who were so vehemently opposed to such an operation in 2000 wouldn’t have the same objections today.

The couple has maintained the property in such pristine condition that whatever concerns neighbors had 12 years ago have evaporated, Ms. Moore believes.
“People really liked what happened,” she said.

A farmhouse dating back to 1886 has four bedrooms on the second floor and a master suite in the rear with its own staircase.

Ms. Moore described the stables as “like a four-star hotel for horses” with padded floors, water fountains in many of the 23 stalls and water views. The compound includes a foaling room, two tack rooms, indoor and outdoor wash stalls, a lunchroom and office and attached heated indoor riding arena. There’s also a large outdoor arena with a gazebo.

“They don’t do anything half way,” Ms. Moore said of the current owners. “Both are very energetic people and they put their all into everything,” she said. “It’s very sad” that they have opted not to operate the horse farm any longer, she said. “They really wanted this horse farm badly,” she said, recalling the battle in 2000.

As expected, the Shelter Island Zoning Board of Appeals gave unanimous approval to a Fire Commissioners application to renovate...

The so-called “Phase I” of the Pridwin Hotel project looks likely to gain approval from the Zoning Board of...

It won’t be decision time Wednesday night when the Zoning Board of Appeals meets for a work session, but...

The Pridwin Hotel overlooking Crescent Beach is planning some major renovations on its 7.3-acre site and will discuss them...

Neighbors to get more notice of ZBA hearings

Residents whose neighbors are applying for area and use variances for their property will get 30 days advance notice...

The Zoning Board of Appeals made short work in approving variances for Heights resident James Welch to make...