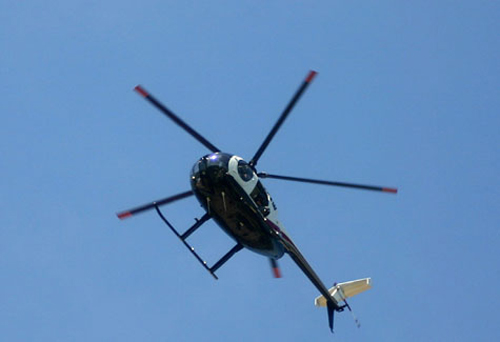 Max Young, a spokesman for U.S. Senator Charles Schumer — whose office, like Mr. Romaine’s, has had numerous meetings about helicopter noise over Long Island that Mr. Grotell attended — describes him as a good one. “Robert Grotell is a forceful advocate for the helicopter industry,” he says, “and was a leader in the unsuccessful industry effort to beat back the quality-of-life-improving regulation that reduced helicopter noise by requiring pilots to fly at higher altitudes and over water.”

The town-owned field has become the biggest noisemaker on Long Island, largely because of the helicopters flying between East Hampton and Manhattan. The choppers fly loud and low over the length of Long Island.

Efforts to deal with the raucous situation have met with stiff resistance from the Eastern Region Helicopter Council, which represents the operators of the choppers.

For example, when Mr. Romaine introduced a county law to try to deal with the helicopter noise in 2008, there was Mr. Grotell at the hearing at the Suffolk Legislature arguing that Suffolk County was preempted by the federal government from passing any law regulating the flight paths of helicopters.

The vote by the East Hampton Town Board to give Mr. Grotell a $15,000-a-year contract to monitor East Hampton Airport noise was unanimous.

Kathleen Cunningham, chairwoman of the Wainscott-based Quiet Skies Coalition, describes the arrangement as a “huge conflict of interest.”

Barry Holden of Noyac, a leader of recent citizen protests to East Hampton Airport chopper noise, says he has been “saddened but not at all surprised that the owner of the company that was hired by the East Hampton Town Board to gather this data is the preeminent lobbyist for the helicopter industry. It just shows how corrupt this [East Hampton] board has become.”

The Sag Harbor Express has editorialized that “it seems to us a little like the fox in charge of the henhouse and makes us wonder if all those calls to that [noise] hotline that we’ve made have, in fact, been for naught. We have to imagine that the East Hampton Town Board has not been ignorant of the fact of who’s been at the other end of the line and what their particular motives may be…”

Pivotal to the East Hampton arrangement was Town Councilman Dominick Stanzione, the board’s “liaison” to the airport. He defends it. “Some people say he’s in conflict,” he says, “but he’s very diligent and professional. I don’t see Robert as a shill for helicopter interests.”

Mr. Grotell, in an interview, said he sees no conflict. He described PlaneNoise as a “one-person shop” consisting of himself. “I have developed a technological solution allowing airports and governmental entities that run airports to collect noise complaints in an efficient manner,” he said.

As for being an advocate, “I’m an advocate of community capability,” said Mr. Grotell. He said his residence and PlaneNoise are located in Port Jefferson. He worked for New York City for 12 years including as deputy commissioner of transportation under Mayor Bloomberg.

His contract with East Hampton has been followed by one with the Port Authority of New York and New Jersey. In August, the Port Authority “entered into a three-year contract with PlaneNoise for a total amount of $54,400,” said Ron Marisco, its assistant director of media relations. “The contract provides the Port Authority with software and a toll-free number and a web form link on our website to collect noise complaints.” This Grotell contract requires him to field complaints emanating from Kennedy, LaGuardia, Newark Liberty, Stewart and Teterboro Airports.

Ms. Cunningham of the Quiet Skies Coalition holds that collecting aircraft noise complaints “should be done in an unimpeachable fashion — by a disinterested third party.”

That would be fair and sensible.