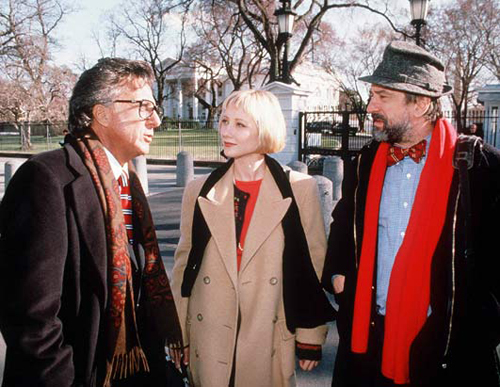 We are now in the final weeks of the political season and, like millions of other Americans, Movies at the Library will focus its attention this month on the hurly-burly spectacle of big-time politics. Our next film, which will be shown on tonight at 7 p.m. is a biting satire called “Wag The Dog,” and it’s one of those rare movies that rises to the level of classic black comedy. Or to put it another way, although the tone of the picture is mordant and heartlessly cynical, it is also very funny.

The story takes place during the re-election campaign of a president who is barely seen and never identified by name. But boy, does he have a problem. Less than two weeks before Election Day, the president is caught making sexual advances to a teenage “Firefly Girl” — a fictional term for “Girl Scout” and, inevitably, accounts of the hanky-panky are leaked to the media and the political opposition. In what can only be described as a preposterous coincidence, “Wag The Dog” arrived on movie screens across the country in December 1997, just one month before the Monica Lewinsky scandal erupted in Washington. Who says life doesn’t imitate art?

In a desperate effort to avert a political meltdown, a White House aide (played by Anne Heche) calls in a world-class spin doctor named Conrad Brean (Robert DeNiro) and puts him in charge of coming up with media maneuvers to divert attention from the crisis. Along with other scams, Brean decides to construct a fake war with Albania, and to carry out that deception, he hires a hotshot Hollywood producer, Stanley Motss (Dustin Hoffman), who is known for his overweening narcissism and flair for manipulation.

The two con artists succeed in their mission of media mirage and, thanks to them, the president wins re-election. But things don’t work out so well for Motss. And let’s just leave it at that. We don’t want to reveal too much of the plot. A lot of high-powered talent went into the making of “Wag the Dog.” The screenplay was written by the Pulitzer Prize-winning playwright, David Mamet, and the picture was directed by the esteemed Barry Levinson. The film’s two stars, DeNiro and Hoffman, turn in brilliant performances. as is their wont, and they get plenty of help from a splendid supporting cast.  Heche is excellent as the neurotic presidential aide who can scarcely believe the shenanigans she gets caught up in. And among those who shine in minor roles are Woody Harrelson, William Macy, Denis Leary and Willie Nelson, of all people.

The film’s title, of course, comes from the old expression, “the tail wagging the dog,” and at the start of the movie, there appears on the screen the following, rather nonsensical caption: “Why does the dog wag its tail? Because the dog is smarter than the tail. If the tail were smarter, it would wag the dog.”

And for those of you who like to look ahead, Movies at the Library  will be showing another film with a political theme at the end of this month, on October 30, just seven nights before Election Day. The presentation that evening will be “The Candidate,” a 1972 movie starring Robert Redford. A preview of that film will appear in the October 25 issue of the Reporter.

In the meantime, join us at the library next Tuesday evening. We’ll begin wagging the dog at 7 p.m.

Grant to Library made in Carol Galligan’s name,as it earns national recognition

The staff of the Shelter Island Public Library spent most of 2020 weathering the daunting challenges brought on by...