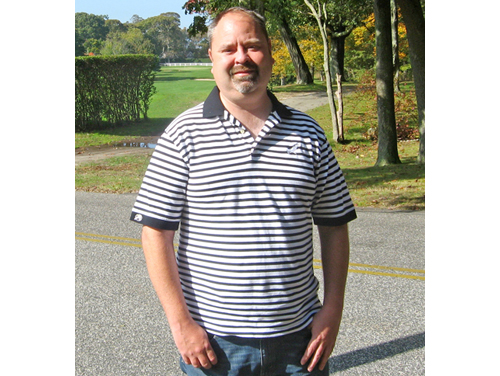 When Bob DeStefano Sr. retired in 2011 as golf pro at the Gardiner’s Bay Country Club after more than 50 years, that retirement set events in motion that were significant both for him and for his son, Bob Jr.

Bob Sr. decided to run for town supervisor on the Republican line. Bob Jr., always interested in politics but not active since college, entered the fray, managing his dad’s campaign. That led to frequent meetings with the Republican Committee.

After the campaign, he accepted an invitation to join. When Amber Williams, chair of the group, wanted to “step back some” and continue as a member rather than an officer, the committee offered the post to Bob Jr. He became chairman early this year.

He’s happy to be on the Island, at least half of his time, with his wife, Elena, after a decade or more in Manhattan. The Island has always been where his heart is.

Years ago, the older DeStefanos had a home in Red Bank, New Jersey where they used to return after the golfing season on Shelter Island. That was before Bob joined the family in 1969. Both Bob and his sister, Nancy, 20 months younger, now married and living in Springs, were adopted. Bob has never had an interest in seeking out his birth parents. “I simply look at it as I’ve been very lucky,” he said. “I had somebody who was smart enough to know they weren’t ready to take care of children and then people that were good enough to take me in. I’m sort of happy with the status quo.”

He graduated from the Shelter Island School in 1987 and went to St. Michael’s College near Burlington, Vermont, where two important things happened: he met his future wife on the first day of college; and he first got involved in politics, volunteering for the elder Bush’s presidential campaign in 1988. He became youth director for the state and went on to a summer job in the White House promoting volunteerism through public-private sector partnerships.

He met the president and the vice president and a number of “behind the scenes political people.” He did a lot of work with Lee Atwater, Bush’s campaign manager in 1988, and Roger Ailes, who went on to found FOX news.

Returning to Vermont in September, he became a member of the Vermont Republican Committee and worked on some congressional races. But in time, he said, “I realized I hated the cold and didn’t ski,” so he asked himself, “What was I doing in Vermont?” He “rectified the situation” by transferring to Rollins College in Orlando, Florida. There he did some work for Jeb Bush and for the Republican National Committee. He was in a recruitment group that reached out to people in organizations that generally are Democratic.

“We’d make overtures to them, a lot of phone calls. Every group has people that are not really going along with the mainstream, and we’d contact them, try to have them reach out to their friends” to join the Republicans.

He graduated from Rollins in 1991 and went on to St. John’s Law School in Queens, a possibility he had been considering all through college. While there, he had little time for politics. He did not get very involved again until his dad’s run for supervisor.

After law school, he worked for several small law firms in the city, dealing mostly with real estate and commercial litigation. He was a part-time volunteer with Rudy Giuliani’s campaign, making phone calls and “whatever volunteers do,” but being a Republican in Manhattan was not really a winning proposition. He always felt like a transient there, too, returning to the Island every weekend because to him, that was home.

He and Elena continued dating and eventually, after times of geographic separations, she began work with the New York State Office for People with Developmental Disabilities on Long Island. They didn’t marry until 2001. “It took me a while to convince her,” he joked. They took an apartment in Mineola and he was glad to be out of the city, although in time found the commute tiresome.

In 2010, he made a major move, working for himself as a solo practitioner. He now splits his time evenly between Shelter Island and Mineola and Elena joins him here weekends. He works from both locations, depending on the client of the moment. Without formal offices, he simply goes to where the client is and works from home in Mineola and from his parents’ home on Dinah Rock Road.

Bob’s glad to be back in politics again, especially on the Island, “a place where a single person can make a difference. It’s small enough that your vote matters. You’re not talking about a two-million vote difference the way you do in national elections. A close race in Florida is 100,000 votes but here you get the feeling that your vote counts.” He thinks elections here are “in play,” the number of registered voters in each party being almost even, with “a relatively large number of blanks.”

He’s looking forward to Election Day, when he thinks Romney will do well on Long Island. “The national polls are meaningless. It’ll come down to a few key states and how that state happens to go will depend on who shows up that day, what the weather is like in certain places and minor factors.”

In other words, we won’t know what happens until it happens.

With Island politics quiet these days, it’s a good time for Bob to learn the local ropes. Next year, of course, when the supervisor’s job and two Town Board seats will be in play, it will be a very different story.