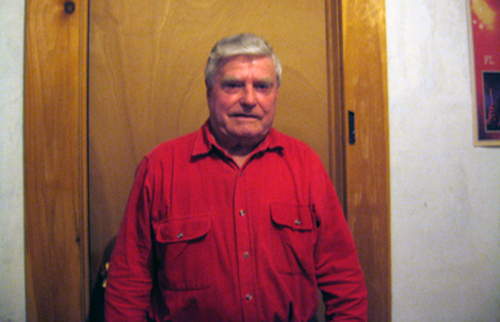 Andy Steinmuller’s heart has always been with his family, his friends and with the volunteer firemen he’s served with wherever he’s found himself, from Queens to Nassau to Shelter Island.

Active with the Island department almost from the first moment he began vacationing here, he continues his service as an Island fire commissioner. He even wrote a book about the men he admires so much — “The Unpaid Professional: the Volunteer Firefighter.”

But to begin at the beginning …

Born in Ridgewood, Queens in 1927 Andy’s mother died when he was a toddler. His grandmother raised him until he was seven, when his father remarried and took the family to Floral Park. He graduated from Sewanica High School there in 1945, but because he was too young to enlist on his own, his father signed the permission papers for Andy to join the Navy, where he became a cook.

“I watched the cooks and got interested and they said, ‘Come on, we’ll teach you.’” He stayed and cooked for his full two-year hitch and then “banged around for a while” before settling down.

His first job was with Bond Bread, working in the home office in New York City, where he stayed for about three years. He was assigned by Bond to its plant in Richmond Hill, Queens, and began delivering bread. “That’s where I met Charlie and Ceil Kraus and we became very good friends. Charlie was one of the drivers. We went out together and then in 1953 I got married and Charlie was one of the ushers at the wedding.” Andy’s wife, Jean, came from Bethpage, and she and Andy moved there, eventually building a home, and starting a family, which grew to two boys and two girls. Andy joined the Bethpage Fire Department, and in the course of time became the chief.

When Andy began to think about a change, Jean’s father, a supervisor at the dairy Sheffield Farm, said there was an opening. Andy went to work delivering milk. When Sheffield sold out to another dairy, Andy stayed for a while, and then took the civil service test to work in the fire marshal’s office of Nassau County. When he passed he was appointed to work for the fire marshal, doing building inspections throughout the county before being transferred to fire investigation.

“I went to Rutgers for two weeks to learn more about investigation and then after a while I decided I would like to teach more on fire safety. So they made me head of fire prevention. I was the supervisor, going out and giving talks and lectures on fire safety. I became a guest speaker at conventions and went to schools, senior citizen meetings. Whoever wanted a talk, I would go out to do it.”

THE ROAD TO SHELTER ISLAND

In 1973, Andy got an interesting phone call. His old pal, Charlie Kraus, told Andy he was planning on buying “a little restaurant,” and wondered if Andy might like to partner with him. It was something to think about, he remembered. Andy had taken his job in the fire marshal’s office and felt that was where his economic security was, but he didn’t want to let his friend down completely. He volunteered to help out and then remembered to ask Charlie where the restaurant was.

“He said, ‘Shelter Island’ and I said. ‘Shelter Island? Where’s that?’ So he told me you had to take a ferry and I said, ‘Gee, I don’t know but I’ll help you out any time I can. I’ll come when I get vacation.’ When I took my vacation, I came out.”

Charlie had also bought a little miniature golf course. “But it was all run down and everything and he asked me if I wanted to help out because he had to have that open at least once a year to keep the zoning. So I fixed it all up and Jean would run that while I helped Charlie in the little restaurant.”

That “little restaurant” is now known as Sunset Beach.

ALL IN THE FAMILY

The family loved it here. Jean found a piece of property and they built their own home and then some A-frame houses (the ones you see off Manwaring Road) as rental units. Initially they rented them out on a weekly basis in the summer, but quickly turned them into year-round rentals. They’re now fully occupied. Until he retired, Andy commuted to his Nassau job, and of course, was active in the fire department here.

Jean died two years ago. Their four children are all nearby, as well as lots of grandchildren. His son Andrew, the eldest, and his family live next door. Arlene Rasmusen, his oldest daughter, lives in one of the A-frames, Michael lives in Orient and Lynda lives at home with her dad.

“I’m the smart one of the family, I stayed single, no kids,” Lynda said, laughing.

Andy remains actively involved with the fire department, elected as a commissioner for the past 15 years. He was a member of the group that brought about the merging of the two departments, continuing to believe that the decision to consolidate was a good thing.

“We saved a lot of money for the taxpayers,” he said, “because now we only had one insurance [policy] instead of two, having just one of everything. It made a big difference.” He was also instrumental in the installation of the water tanks, placed in various locations around the Island, where “running for the bay” for water to pump is not really a realistic option when fighting a fire.

Life is quieter now. But during golf season, Andy writes “a little something” every week for the Shelter Island Reporter, to keep folks up to date on the happenings at Goat Hill. “The good thing is, people read it and they know there’s a golf course here, it keeps it in front of people. People read the paper, know what’s going on, when there’s tournaments and things.”

He doesn’t play anymore, unless, of course, the fire department has a tournament.