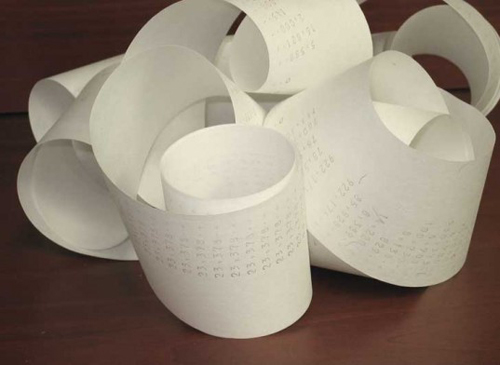 It’s what the Suffolk County Legislature is noted for — passing first-in-the-nation laws.

And the panel has done it again, passing a measure that bans receipts coated with the chemical BPA, the acronym for Bisphenol-A, which has been found to be a cause of cancer and other health maladies.

“Once again this institution is going to set the standard for other states to follow,” declared Legislator Steve Stern of Huntington after the passage of his bill December 4.

And County Executive Steve Bellone intends to sign it into law.

BPA has become common, used widely to harden plastics and as a coating inside cans of beverages and food. Another use is coating the paper used for receipts enabling it to become “thermal paper” and react to heat to print numbers and words.

In 2009, the Suffolk Legislature enacted a first-in-the-nation law — also authored by Stern — prohibiting the use of BPA in baby bottles and other beverage containers used by children under three. Mr. Stern was made aware of the health dangers of BPA by Karen Joy Miller, founder of Prevention is the Cure, an initiative of the Huntington Breast Cancer Action Coalition. Prevention is the Cure emphasizes the elimination of the causes of cancer.

Ms. Miller testified at the legislative session at which the measure passed 16-to-1: “We’ve got to end this disease [cancer], and a bad-acting chemical [like BPA] is at the top of the list.” After the vote, she commended “Legislator Stern and the Suffolk County Legislature for taking this important step to protect public health.”

Mr. Stern’s “Safer Sales Slip Act” was also backed by Dr. Philip Landrigan, chair of the Department of Preventive Medicine and dean for Global Health with the Children’s Environmental Health Center at Mt. Sinai School of Medicine in New York City. It will protect “the health of the public by reducing exposures to BPA for all Suffolk County families and, most especially, pregnant or nursing women, and women of childbearing age … As leaders in pediatrics and preventive medicine, we strongly support this legislation.”

The Stern bill declares that the Suffolk Legislature “finds and determines that BPA is a synthetic estrogen which disrupts healthy development and can lead to an altered immune system, hyperactivity, learning disabilities, reproductive health problems, increased risk of breast and prostate cancer, obesity and diabetes.”

The bill refers to Stern’s earlier “Toxin Free Toddlers and Babies Act.” He noted that since the passage of “this groundbreaking ban,” a national counterpart of the measure was enacted — “finally, this summer” — by the U.S. Food and Drug Administration.

Of receipts coated with BPA, the bill states that “thermal paper can transfer onto anything it contacts, including skin” and through the skin to  “be absorbed … into the body … This dermal exposure to BPA poses a risk to public health and particularly to those whose employment requires distribution of such receipts.” Moreover, “the thermal paper containing BPA is also utilized in bank receipts and at automated teller  machines and gas pump receipts, creating multiple and ubiquitous points of exposure in daily life.”

The bill cites research that has determined that workers employed at retail and food service industries, where BPA-containing thermal paper is most commonly used, have an average of 30 percent more BPA in their bodies than adults employed in other professions.”

And, critically, as the legislation notes, there are several manufacturers that produce thermal paper that does not contain BPA. That’s the way it is for toxic products and processes: there are safe alternatives for them. There are safe substitutes for virtually every deadly product and process. The problem? Vested interests that continue to push and defend them.

The Stern law carries penalties of $500 for the first violation and $1,000 “for each subsequent violation.” It hopefully will be replicated far and wide.