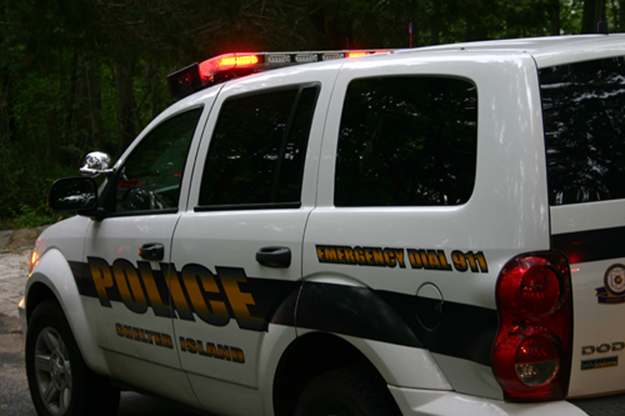 Alison M. Sneed, 54, of Sag Harbor was charged with driving while intoxicated and released on $250 bail.

Vincent G. Flauto Jr., 47, of Greenport was charged with driving while ability impaired by drugs and unlawful possession of marijuana. He was released on $500 bail.

On Saturday, July 20 at about 5 p.m., Kathryn A. O’Hagan, 44, of Shelter Island was arrested on a charge of harassment in the 2nd degree. She was arraigned in Justice Court, Judge Helen J. Rosenblum presiding, and released on her own recognizance.

Gianpietro Pecora, 26, of Bayside was driving on West Thomas Street at about 9:25 p.m. on Sunday, July 21 when he was stopped for speeding — 50 mph in a 40-mph zone — failure to stop at a stop sign, failure to keep to the right and for stopping on a highway. He was subsequently arrested and charged with DWI. Mr. Pecora was arraigned in Justice Court in front of Judge Mary-Faith Westervelt, and released on $100 bail.

SUMMONSES
Alyssa Maria Bliss, 50, of New York City was given a summons on Smith Street on July 20 for failure to yield the right of way to an emergency vehicle.

Also on July 20, Cody S. Saunders, 22, of Hampton Bays was ticketed on North Ferry Road for operating a vehicle while using a portable electronic device.

Carlos Alberto Dominguez, 40, of Miami, Florida and Marc Antony LaGuerra, 44, of New York City were given summonses on July 21 for failure to stop at a stop sign on West Neck Road.

Bilal Tai, 19, of Great Neck was ticketed on July 21 on Shore Road for making an unsafe start and then on West Neck Road for failure to signal a turn.

On July 21 Devon P. Annabel, 24, of Cutchoque was given a summons for operating a jet ski without a safety certificate.

Edoardo Romani, 64, of Greenport was given a ticket at North Ferry Road and Town Hall on July 22 for “failure to turn as required.”

ACCIDENTS
On July 19 at Hubbard’s Repair Shop, John Capon of Shelter Island backed into a vehicle that was being repaired and belonged to Thomas Curcio of Shelter Island. There was no damage to Mr. Capon’s vehicle and under $1,000 to the driver’s-side doors of Mr. Curcio’s.

Phillip Mannino of Bridgehampton reported that he was parked in the North Ferry line on July 19 when a vehicle driven by Eileen Livine of Elmont  backed into his vehicle, causing minor damage (under $1,000) to the rear bumper of Ms. Livine’s vehicle.

On July 19 at the Recycling Center, Elisa Tebbens of Sagaponack was backing up, temporarily blinded by the glare of the sun, and did not see Miguel A. Natal’s vehicle, which was parked. Damage to the driver’s-side door of Mr. Natal’s vehicle and the rear passenger-side of Ms. Tebbens’ vehicle was estimated at over $1,000.

OTHER REPORTS
On July 16, a caller told police that two waterskiing boats were too close to his vessel, anchored in Smith’s Cove. Police did not observe any violation of the 100-foot distance rule.

On July 17, police advised an individual that he was no longer welcome at a Heights business.

Police put a person on notice on July 17 not to be in contact with another individual via Facebook.

A submerged mooring stake was reported on July 17 as a possible navigational hazard. A marine unit marked the spot and the Waterways Management Advisory Council notified.

On July 17, a Center caller told police that a possible explosion had caused a large amount of smoke in the area of his residence. A vehicle burnout was the cause of the smoke; police spoke to the owner.

A downed tree blocked a Shorewood roadway on July 18. The Highway Department was notified.

A loud party and fireworks were reported at a home in the Center on July 18. The resident was informed that fireworks are illegal in New York State and advised to keep the noise down.

Police opened an investigation into an alleged sex crime on July 19; it was subsequently determined to be unfounded.

Police received a report of skeet shooting on Ram Island on July 19. The area was patrolled but the shooters were gone when police arrived.
On July 19, a Center resident found property that was turned over to police for further investigation.

A caller told police there was someone asleep on the shoulder of a road in West Neck on July 20. Police woke him up “and sent him on his way.”

A possibly illegal post and pulley mooring in the Crab Creek area was reported on July 20.

Police were told on July 20 that a boat attempting to anchor in West Neck was very close to other boats. Police administered a field sobriety test and the results were negative.

An anonymous caller reported a possibly intoxicated driver in a Center parking lot on July 20. Police patrolled the area with negative results.

On July 21, a dog at large was reported at the Recycling Center; the dog was returned to its owner. Two other dogs were reported on a Center property on July 21; the dogs’ owner said a gate had been left open by mistake. A pit bull at large was seen on July 21 in Cartwright; the area was patrolled with negative results. On July 22, a Center caller told police a dog was at large on the deck; it was returned to the owner with a warning. Police located the owner of another dog at large in the Center on the 22nd.

Gun shots were reported in the South Ferry area on July 21. No houses were within 500 feet of the shooting.

A Ram Island caller reported a vehicle on the beach on July 21; police issued a warning to the driver for not having a town beach driving permit.

On July 21, police investigated the broken passenger window of a vehicle in the Cartwright area. It was possibly the result of a person shooting a BB gun in the neighboring woods. The investigation was continued.

Illegal dumping was reported in Silver Beach on July 22; police were unable to find any dumped brush in the area.

On July 22, police gave a warning to the owner of a vehicle on Reel Point, who did not have a town beach driving permit.

An automatic fire alarm was set off at the Perlman Music Program on July 16. It had been activated by steam from clothes in a dryer.

At 12:20 a.m. Wednesday, the Shelter Island Police Department responded to a “911 hang up call” in the Longview...