No, a scene from a dramatic action movie wasn’t being filmed in Greenport Harbor on Monday.

What happened was this: After six people were flung from a speeding powerboat that had turned sideways, two strangers who live on opposite sides of the bay played integral roles in rescuing the victims and ensuring safety in the harbor by bringing the runaway boat to a halt.

One responder fished the victims out of the water. The other jumped onto the unmanned boat while it was spinning out of control at nearly 17 knots, or 20 mph.

Off-duty U.S. Coast Guardsman and Islander Patrick O’Halloran, 27, was on his father’s boat and had just dropped a relative off in Greenport about 5 p.m. after boating around the Island when the accident happened just outside a 5-mph, no-wake zone.

According to police, a group of men in a 37-foot high-speed boat, known as a “cigarette boat,” were traveling from Connecticut and heading to Claudio’s restaurant when their vessel lost control, ejecting its occupants, Southold police said.

The boat’s driver, Christopher Shakir, 27, of Herbon, Conn., was traveling at “full throttle” at the time, police said.

Mr. O’Halloran compared the boat’s tipping motion to that of a vehicle ending up on two wheels during a sharp turn. After the occupants hit the water and the boat continued to spiral out of control, Mr. O’Halloran said he first drove to a group of four victims, then over to two men who had drifted.

His family members used a fishing net to pull them out of the water.

One by one, they were pulled to safety onto Mr. O’Halloran’s boat.

“The scary part was the boat was still going really fast and we didn’t know where it was going — like a missile on the water,” Mr. O’Halloran said, estimating the boat was speeding at about 34 knots, or 40 mph, at the time of the crash.

Garrett Moore, 35, of Riverhead, a part-time captain for Sea Tow, was out catching weakfish with his wife and son when he heard on his radio that a boat was out of control. After he learned his boss, Captain Bill Barker, was responding to the accident, Mr. Moore made arrangements for the two to meet on the water. During the ride to the scene, the two captains kicked around ideas about what to do.

One idea was to throw a line in the water to try to stop the speed boat’s motor.

“We went over there not knowing what we were going to find,” said Mr. Moore, who is also a Riverhead High School social studies teacher.

As they approached the captain-less cigarette boat, which was now traveling in elliptical circles at about 20 mph toward Mitchell Park after one of the two engines stopped working, Mr. Barker asked Mr. Moore if he was comfortable jumping onto the out-of-control vessel.

“I emptied my pockets in case I fell in the water, he matched the speed and I took a flying leap of faith,” Mr. Moore said.

He landed safely. As he tried to get the boat under control, Mr. Moore said he had trouble concentrating because the vessel’s “super-powered stereo” was blasting music and he couldn’t figure out how to turn it off. Eventually, he said, he had to shut the battery down.

Police said the boat’s other passengers were: Justin Shakir, 31, and Derek Chokas, 32, both of Manchester, Conn.; Clint Shakir, 28, of Chaplin, Conn.; Christopher Ginelewicz, 45, of Newington, Conn.; and Michael Massi, 45, of Southington, Conn.

One passenger suffered rib injuries and each passenger showed symptoms of hypothermia, police said. They were treated and released at the scene by Greenport firefighters. Southold Town and Shelter Island bay constables also assisted in rescue efforts, police said. No charges were filed.

All ferry and other boat traffic was halted during the response in the harbor.

Despite initial reports from officials that the speed boat hit a wake and the men were wearing life jackets, witnesses said the occupants didn’t have life jackets on and that the accident occurred because the driver had been “showboating” by speeding and swerving quickly side to side.

Although the boat and its passengers were both dropped off at the dock, Mr. O’Halloran, who is also a former North Ferry boat captain, and Mr. Moore didn’t meet until Tuesday, after they were requested by Times/Review to take part in a joint interview at Mitchell Park Marina.

There, both shared stories about how they’ve been involved with other rescue efforts.

Mr. O’Halloran and his cousins involved with Monday’s rescue saved a man’s life in California after he crashed a John Deere Gator utility vehicle, he said.

As for Mr. Moore, not only did he retrieve a stranger’s unmanned jet ski a few years ago, he also helped rescue a 57-year-old woman from drowning in the Peconic River in April 2012.

Both East Enders said they were grateful no one was seriously hurt during Monday’s accident and believe the situation could have quickly turned tragic.

“It’s always different,” Mr. O’Halloran said about rescue efforts. “Each one makes you better the next time.” Eye on the ball: Going for the record 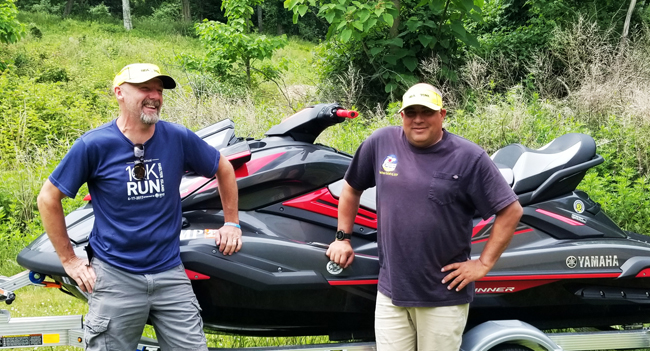 For their most challenging salvage jobs, the crews at Sea Tow Eastern Long Island turn to their oldest, most...