Each day, some two billion gallons of water are pumped from Long Island Sound into the Millstone Power Station in Waterford, Connecticut — that state’s only nuclear power plant — and used to help cool systems and support the station’s two operating reactors. After it heats up, about 90 percent of that water is discharged back into the Sound at about 20 degrees warmer than when it was taken in, said Ken Holt, a spokesman for Millstone.

Suffolk County Legislator Jay Schneiderman (I-Montauk), who represetns Shleter Island, wants to better understand what, if any, impact that heated water is having on the ecology of the Sound and surrounding waters and has reached out to researchers at Stony Brook University’s School of Atmospheric Science, hoping they can determine whether Millstone might be “overheating” the Sound’s waters.

“No one has really studied the broader impacts of this plant,” Mr. Schneiderman said in a recent interview, noting that biology experts have recorded an “undeniable” increase in Long Island Sound water temperatures over the last few decades, which has affected the health of local fisheries, including lobster and flounder populations.

Soon, the Waterford plant, which is just under 10 miles north of Plum Island, will need to renew a permit mandated by the federal Clean Water Act. Known as a National Pollutant Discharge Elimination System permit, it helps the government regulate pollution — in this case thermal pollution — discharging into ground and surface waters.

The Clean Water Act also requires such plants to use the best available technology in order to best protect local environments, something Mr. Schneiderman says Millstone is not doing.

Newer technologies, which release heat into the atmosphere instead of into nearby waters, have become the new environmental standard, he said.

To continue using outdated systems, nuclear plants like Millstone can apply for a variance, so long as they can “assure the protection and propagation of a balanced, indigenous community of shellfish, fish and wildlife in and on the body of water into which the discharge is to be made,” the law reads.

Come September 2015, the plant will need to reapply for a variance to receive its NPDES permit in order to continue operations, as upgrading to the best available technology would not be financially feasible at this time, Mr. Holt said.

“The cost would definitely be in the billions of dollars,” he said.

Nuclear power plants operating in violation of the Clean Water Act have become the focus of ongoing litigation. In September a coalition of environmental groups filed lawsuits in federal courts in New York, San Francisco and Boston seeking to force the U.S. Environmental Protection Agency, the leading regulatory agency, to establish a stricter environmental standard “that better protects the hundreds of aquatic species near the nation’s 1,065 power plants and other facilities,” according to a release from the not-for-profit NY/NJ Baykeeper group. 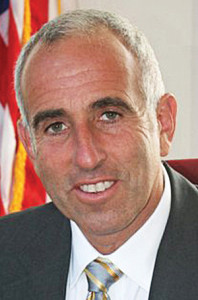 Mr. Schneiderman said his interest in Millstone was piqued after he spoke with biology experts who cited high temperatures as one of the leading causes of the declining lobster and winter flounder populations, among other negative impacts to the ecosystems.

“I think what’s clear is that the Sound cannot support the types of life that had once lived there for hundreds of years, and that’s in part because of temperature changes,” he said.

Mr. Schneiderman said that during the 30 years the Millstone plant has been in operation, Long Island Sound water temperatures have increased by two degrees Fahrenheit, six times higher than the change suggested by global warming data, which stands at only a 0.3 degree increase globally over the same period.

He said the calculations were based on temperature data provided by the Millstone Environmental Lab, which is operated by Dominion Generation, a Virginia-based power corporation that operates nuclear, coal, water, solar and wind-generating power plants in 15 states, including Connecticut.

Stony Brook biologist Christopher Gobler is helping to draft a study outline that, if approved for funding, would answer Mr. Schneiderman’s questions. He said temperatures are increasing in the Long Island Sound in part due to climate change.

Suffolk Closeup: Tribute to a protector of the natural world

For Robert (Rob) Vasiluth, it began on 9/11. The operating engineer from Suffolk County was in Manhattan hoisting a... Cornell Cooperative Extension of Suffolk County is offering free Zoom workshops to support workers who are essential in the... The New York State Department of Environmental Conservation (DEC) is investigating whether a local business is pumping out water...