It’s one of two things, according to Benjamin Franklin, that is certain in life: taxes.

And one proposal by New York Governor Andrew Cuomo aims to at least ease the tax burden for about 1.3 million people across the state.

While the governor can’t pass legislation preventing another of Mr. Franklin’s certainties from occurring — death — his ‘Opportunity Agenda’ would provide an average $1,150 in annual tax credits for over 125,000 homeowners in Suffolk County, and 1.3 million across the state.

“When you look at the problems we’re facing, and you look at the issues we’re dealing with, they all come back to the taxes,” he said on Wednesday, announcing the proposal at Hofstra University.  “The flight of young people because they can’t afford to live here. That’s taxes … You have no long term future if you are the tax capital of the nation. Period.”

Residential property taxes in the New York metro area are among the highest in the nation. A 2013 study by the Tax Policy Center noted that the nation’s top three highest-paying counties include Nassau, Westchester, and Bergen (New Jersey) counties.

A proposal coming from the governor would offer tax credits to households that pay more than 6 percent of their income in property taxes and earn less than $250,000 annually. Only taxpayers whose taxing districts remain under the state’s two percent tax cap would be eligible. 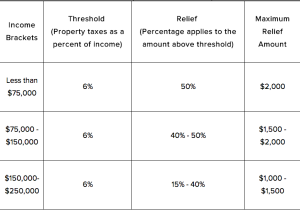 According to a spokesman for the governor’s budget office, Morris Peters, the program would be phased in over a course of four years, offering homeowners more each year until he program is fully phased in. Maximum credits of $500 would be available in the first year of the program, increasing up to a max of $2,000.

Renters would also be eligible for credits, averaging $400 each, the governor said.

Mr. Peters said the funding is available due to a reduction in spending and an increase in revenues brought in from the state over the past four years. Once it’s fully phased in, the program is expected to cost the state $1.66 billion. He added that the ‘Opportunity Agenda’ wouldn’t affect the state’s STAR program, another tax credit for property owners.

The proposal still has to pass both houses of the state Legislature, which just kicked off at the start of January.

Suffolk County Executive Steve Bellone (D-Babylon) said that “those excited about the prospect of buying a home here also have to face the reality of the crippling taxes that they will have to pay with those homes.”

State Senator Ken LaValle (R-Port Jefferson) did not respond to a request for comment on the governor’s proposal.

According to the Tax Policy Center, property taxes for homes in Suffolk County average $7,600. Nassau weighed in at nearly $9,100.

By contrast, 24 counties nationwide, mostly in Louisiana and Alabama, have annual property taxes under $250.