This past year, Island resident Karen Kiaer undertook what she describes as a “labor of love.”

The result is “Ancestors Through My Eyes,” a nonfiction book describing her journey unearthing stories of her Ingersoll ancestors, following 10 generations of family members as they traveled through Massachusetts, Michigan and New York.

Ms. Kiaer has always been a self-described history nerd. When you’re a descendent of Noah Webster (of dictionary fame) it’s hard not to be. She holds a B.A. in History from Santa Clara University and a Masters in Education from Long Island University.

When Ms. Kiaer is not in the garden, or potting, or painting, she serves as the historian for the Shelter Island chapter of the Daughters of the American Revolution (DAR) which is the largest women’s service organization in the world, with over 170,000 members.

The local DAR chapter oversaw the preservation of the Island’s colonial cemetery behind the Presbyterian Church, which holds nine Patriots — men who fought in the Revolutionary War — three of whom served in George Washington’s First Continental Congress.

Ms. Kiaer was inspired to write “Ancestors Through My Eyes,” she said, because, “When I was a little girl I would spend the night at my grandmother’s house and my great- grandmother’s portrait would stare at me. It wasn’t until I was an adult that I wanted to know about this mysterious woman. Once I retired, I had the time to research my family.”

By visiting cemeteries, sifting through old records and consulting genealogists, Ms. Kiaer discovered the complicated and often surprising stories of the people who had formerly just been stern, sepia portraits on her beloved grandmother’s walls.

Her first chapter transports the reader to a time where “every man and woman was a farmer, every house was made of logs, and every tool was made of wood.”

It tells the story of John Ingersoll I, Ms. Kiaer’s first ancestor to cross the Atlantic Ocean to America in the early 17th century, and how he courageously weathered bad harvests, freezing winters and rightfully hostile Native Americans to “seek God and property” in the name of the British crown.

Nine chapters later, we learn about Nurma Nadjy Ortland, born in 1894, who lived a life of comparative luxury in a Bel Air mansion, always dressing, “impeccably” in silk dresses that “schussed.”

To uncover this information, Ms. Kiaer traveled to libraries and historical societies and looked at primary source material that hadn’t been viewed in over 200 years, which was, she said, “really exciting.”

Some of the things she found out were surprising. “My Civil War great-grandfather on Lake Michigan — I thought he only had one wife,” Ms. Kiaer said. “When I opened up a dust-covered box, I discovered he’d had three wives and married his mother-in-law.”

In the fall, Ms. Kiaer will speak at historical societies in Massachusetts and California about the process of researching and writing the book.

She plans to retail it on Amazon, as well as at historical organizations and DAR chapters. “That’s my market,” the author said. “People who care about history.” 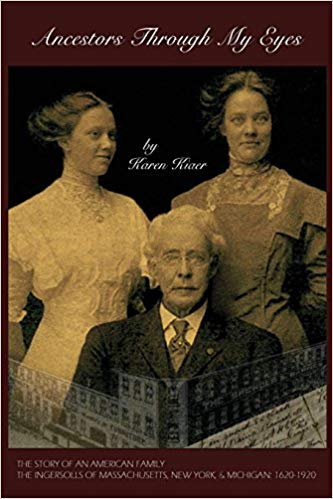 Island bookshelf: A loving memoir of a time and place

On Sunday, September 2, the Shelter Island Historical Society will host an art show and book signing from 4...

Wallace Stevens wrote that “Death is the mother of all beauty.” A century later, in the basement of the...