We’re on our fourth year now. We opened on July 3, 2015 and have been going strong ever since.

We’re a small brewery here, only a half barrel at a time, so it’s really a true craft brewery. We’re constricted to just selling from here, because we simply just don’t make enough beer to be able to put it out on taps at bars and restaurants. Everything is handmade in a very small batch. We use ingredients from the island here. Some of the stuff comes from my backyard actually, from my garden.

Most of the time we start at 4 a.m., and often times it goes late into the night because we are constantly running out of beer. We want to keep that small batch handcrafted thing going, rather than industrialize. Making beer is a pretty simple process. It’s the combination of grain, hot water, yeast and then you’ve got beer. It sits in a fermenter tank for sometimes a little more than two weeks. It’s all about all the flavors that go in and the hops that you use, and the adjuncts you add to it along the way.

It’s too hard to pick my favorite beer that we make. I love them all, and they all sell equally believe it or not. Some of my veterans are 114, which is an IPA, and because we’re on Route 114, we brew it for 114 minutes and add hops constantly every three to five minutes that produce different levels of flavor.

The reason I am brewing this beer is because I like to cook. I’m a foodie and my friends inside that help out are also chefs, so we concentrate more on the nuances of flavor more than anything else.

My favorite part is that I don’t need to have a restaurant and I can do my flavor thing right here without going into 18-hour days and becoming a slave to a kitchen.

“The Work We Do” is a Shelter Island Reporter multimedia project profiling workers on the North Fork. It is made possible by Peconic Landing in Greenport. See photos on Instagram@the_shelterislander. 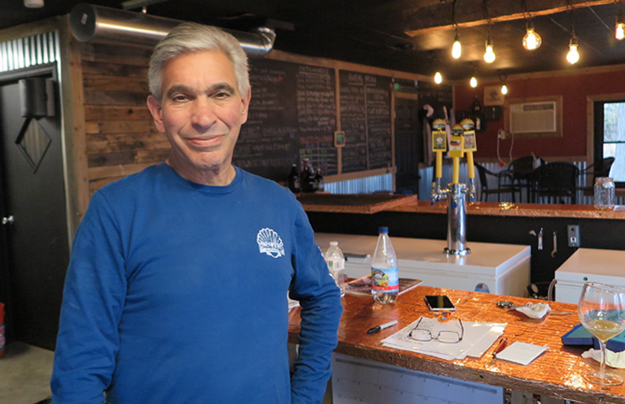 Brought to you by: My name is Brian Becker. I’m a captain here at Sea Tow Eastern Long Island.... The Work We Do: John Reuschle, Coecles Harbor Marina and Boatyard

My name is John Reuschle. I’m an [American Boat and Yacht Council]-certified marine electrician and diesel tech here at... “A Taste of the Island,” the Perlman Music Program’s (PMP) annual summer benefit, took place at the waterfront campus...