Abby Kotula is vice president of the Shelter Island Class of 2020, a multi-sport athlete, and although she doesn’t consider herself a great cook, when it’s time for macaroni and cheese, her considerable project management skills guarantee a speedy and excellent result.

“You have to put in your own cheese,” Abby said. “I start with Kraft, it’s the best, despite what people say about Annie’s. And I use a blend of cheeses.”

From cross country running to volleyball, cheerleading, basketball, softball and baseball, Abby has been a spirited participant in high school sports, if not a star. “Some people are great at one sport and they play it every day,” she said. “I’m not great at one single sport and that’s why I’ve done so many.”

In ninth grade she was the lone female player on the JV baseball team, a left-handed pitcher on a team of guys, most of whom she’d known for years.

Born in 2001, Abby grew up in a house on Bowditch Road with her brother Michael, who is six years younger. Her dad, Ed Kotula, is a captain on the South Ferry, and her mom Vicky is a children’s librarian in Greenport.

There were 22 students in Abby’s kindergarten class at the Shelter Island School, and the 12 set to graduate this year have been together for almost 13 of their 17 years. “It’s been quite the journey,” she said. “It’s been a little difficult for people from the outside to come into such a closed environment.”

With graduation in sight, Abby’s been thinking a lot about the freedoms and the limitations of growing up on a remote island and attending a small school. “Everyone knows everything about everyone,” she said. “I don’t care, because I like me.”

She said she’d attended homecoming at a couple of much larger high schools, and got a glimpse of what she missed. “I had tears in my eyes at one of them,” she remembered. “They have a football team, and there is a big game. With that said, I don’t have any regrets growing up here. I have made my best friends here and we won’t drift apart.”

For four summers, Abby’s worked at the Pridwin, busing tables, serving at weddings and the barbecue. She’s sorry she can’t go back this summer, but renovations will force the Pridwin to stay closed for the season, and force her to find another job.

“I got to stand next to some of my closest friends and look out at amazing views,” she said, and gave a shout-out to the generosity of local businesses and the Shelter Island Educational Foundation for making these trips possible.

Another trip led by Mr. Theinert to the Strongpoint Theinert Ranch brought Abby and her classmates to the mountains of Magdalena, New Mexico, where they built a campsite as a service project, and hiked with veterans working through the difficult adjustment to civilian life that is so common in those who see combat.

“They told their life stories,” she said. “I remember everything they said.”

Abby’s participation in the Rotarians Youth Leadership Association, (RYLA) beginning last spring, has been life-changing. She and her classmate, Emma Gallagher, were inspired by the example of Islander Luke Gilpin, who graduated in 2018, attends George Washington University, and is a senior leader with RYLA.

In RYLA, Abby found an organization that seeks to develop leadership in young people who are not necessarily outgoing, public-speaking people, but would like to be “quiet leaders” in their peer groups.

A spring RYLA program in April of 2018, followed by a summer program in Massachusetts, were enough to convince Abby that the Rotary organization was for her. Organizing and coordinating the multiple fundraisers and service events that RYLA sponsors tapped into her strengths, and introduced her to students from all over the Northeast.

“I was very quiet before RYLA, and since quiet leaders are often passed over, RYLA tries to get everyone involved,” she said, adding that she made her way through a competitive selection process to become a senior leader with RYLA.

In the fall, Abby will study at Southern New Hampshire University (SNHU), and plans to work in hospitality and event planning after graduation. She’s particularly interested in environmental issues in hospitality management, an interest that was piqued when she was a prospective student attending a class at SNHU. She asked a question about hotels going green, and discovered this question is an important challenge in hotel management and other hospitality disciplines.

She was inspired her to write her senior thesis about the problem of pollution in cruise lines. Her research showed her evidence of cruise ships the size of small towns, that dump plastics and food waste in the ocean, use dirty fuels, and generate more pollution than a town on land. One of her dreams is to figure out how to make a more sustainable model for this industry, and go on a cruise herself one day.

Contemplating the future of Shelter Island, she worries that the movement toward a tourist economy will continue, and the school will disappear altogether. “Every year the classes get smaller,” she noted.

When Abby started kindergarten, the overall school population was around 250. Today it’s under 200.

She’s aware of a few senior classmates who intend to come back to Shelter Island after college, but she isn’t one of them. “I want to travel, to find out about other cultures, and you can’t find any of that here,” she said. “And it’s very expensive.”

No matter where she lives, she said she’ll stay close with the steady and reliable friends she’s made here. “There are two types of friends when you are in a situation,” she said, describing her best friends. “The kind who will freak out with you, and be there for you in that way, and the kind who will stay calm and help you through.”

What do you always have with you? On a memory shelf in my room I have the ticket I used to go from Tarifa in Spain to Africa on a ferry.

Favorite place on Shelter Island? The school. I’ve had the most fun memories there.

Favorite place not on Shelter Island? The RYLA summer camp at Norwich Lake, in Massachusetts.

When was the last time you were elated? When I found out I made Senior Leader in RYLA, the happiest moment of my life.

What exasperates you? When people try to be someone who they are not.

What is the best day of the year on Shelter Island? The day of the fireworks. Island profile: Owen Gibbs is looking ahead, not down

Seventeen-year old Owen Gibbs is tall, so he’s used to looking down a lot. But these days he is... 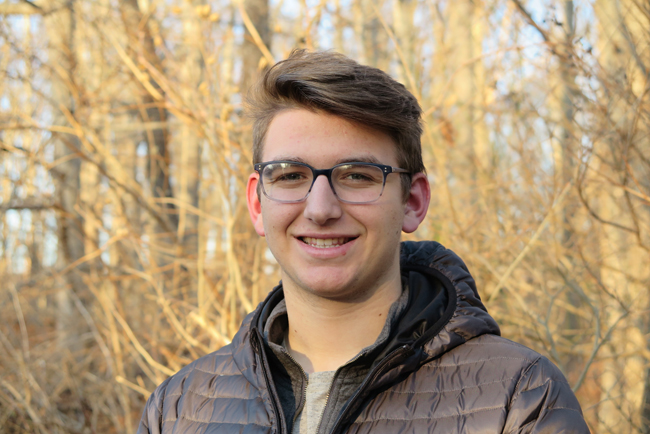 Over 50 years ago, when John Kaasik first set eyes on Shelter Island, he was 11 years old, riding...