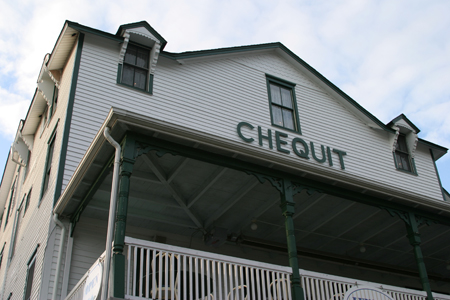 The Chequit Inn will continue to be run by James and Linda Eklund this summer as they hammer out a contract for its sale to Cape Advisors of Cape May, New Jersey, and New York City.

“We’re fully focused on running it this summer,” Mr. Eklund said about the Chequit, promising there would be a lot of “exciting” events happening at the inn, an anchor business in Shelter Island Heights.

A deal could close at the end of the summer or early fall, according to broker Brandon Tarpey, director of sales for Massey Knakal Realty Services in New York City. He is handling the pending sale.

“It’s never a done deal until it’s done,” Mr. Eklund commented in a telephone interview Friday morning. “We’re optimistic” about closing a deal. He made a similar comment last winter after the Chequit won Zoning Board approval for variances needed to construct a pool and patio at the inn. The board’s approvals were conditions of the contract of sale.

Cape Advisors maintains several hotels in Cape May and is involved in renovations of the former Bulova Watch factory being converted to condominiums in Sag Harbor.

“It will be in good hands” if the deal closes with Cape Advisors, Mr. Eklund said. He said it was important to him that new owners continue to operate the inn in a way that would be acceptable to neighbors and to the rest of the community.

Representatives of Cape Advisors told residents at a private meeting last winter that there would be no deal with the Eklunds unless the variances were granted to allow for the pool and patio.

During the Zoning Board’s hearings on the case, residents voiced concerns about noise from the pool area. Sound experts hired by the Heights Property Owners Corporation, which formally opposed the application, and by Cape Advisors had some disagreements over what steps might be effective in containing noise. Finally, the ZBA agreed to allow the pool and patio with the provision that an 8-foot-high wall be constructed to contain noise.

ZBA member Patricia Shillingburg was the only board member who objected to the wall, arguing that while the pool would be used only a few months a year, the wall would stand all year and create a “hot spot” because there would be no breezes around the pool.

“I don’t see a noise problem,” she said, but she failed to convince her colleagues to reverse their stand.

In granting approvals, the ZBA added a caveat that SoundSense LLC of East Hampton, the sound engineers hired by Cape Advisors, be required to conduct tests after the wall is constructed. Other conditions to the approval limited use of the pool and patio to guests staying at the inn and restricted the hours of operation from 9 a.m. to 9 p.m. Water for the pool must be trucked in from off-Island, the ZBA said.

The ZBA also approved shifting the Summer Cottage on the property back from the street to accommodate the pool and patio but at a subsequent meeting approved demolition of the cottage. It will be replaced by a replica. With Memorial Day weekend typically marking the beginning of the summer season on Shelter Island, 2016 is less about...