It might seem like a headline from last spring, but the Shelter Island Country Club Board of Directors is once again hunting for someone to manage the restaurant after a disappointing year for Dan Murray who ran the Fairway at Goat Hill this summer.“They got a late start and had some problems along the way,” said board president Ron Lucas. That combined with the fact that while Mr. Murray was experienced at running an eatery at a golf course, he had concentrated on breakfasts and lunches, Mr. Lucas said.

Goat Hill depends on dinner patrons looking for more substantial entrees to complement the bar operation and that’s something that wasn’t as comfortable for Mr. Murray to provide, he added.

This summer, as in past years, revenues from the bar are separate from those of the restaurant. Other restaurant managers have complained in the past that it’s difficult to make a sufficient profit without combining both revenue streams.

Is that a possibility in the future?

“We’re starting from scratch and all options are on the table,” Mr. Lucas said. At the same time, he explained that as a municipal golf course, the club does have to generate enough money to maintain the club house and golf course.

The Shelter Island Country Club isn’t a nonprofit and is a corporation, he said. But the effort is to keep costs down for members who pay about $500 a year as opposed to higher fees charged by private clubs.

Is it possible for a restaurateur to run an operation that can make money without getting a cut of bar revenues?

“Some people would say you can,” said Mario Saccente, executive vice president of the Long Island Restaurant Association,  a nonprofit that provides information, education and various services to more than 500 restaurants on Long Island.

But “it is unique” to have the bar revenues separate from those of the restaurant, Mr. Saccente said. It depends how much profit the restaurant operator is seeking to make it worth his while.

Mr. Saccente knows Dan Murray and Mr. Murray’s operation at Poxabogue Golf Center in Bridgehampton and a similar operation in Montauk and said he thought that might well have been a good match for Shelter Island.

“If they want to take that little gem they have, I believe there’s a way to do it,” Mr. Murray said about revising how the restaurant is run. But he declined further comment.

The golf course this fall is in the best condition it has been in for a long time, Mr. Lucas said. New grass seed was planted in many areas and the tees are being built up, he said.

Although the Country Club doesn’t operate as a nonprofit, the effort is to run a close balance that enables low costs to members and enough money to cover maintenance of building and grounds without having to pay anything in taxes, Mr. Lucas said.

That has worked out almost every year, he said. Only in 2006 was there a small profit on which taxes had to be paid, he said.

As it stands, Harry Brigham, who operated the bar for the club plans to return next summer.

With respect to the restaurant, “We’ve got some ideas and we’ll see what happens,” Mr. Lucas said.
[email protected]

Alex Cannon has died: Island rallied to help with medical and other bills

In a loving tribute to her soul mate, Kim Schramm-Cannon announced the death of Alex Cannon on her Facebook...

A message from the Shelter Island Country Club Board of Directors: “The weather forecast for Saturday is bad. So,... 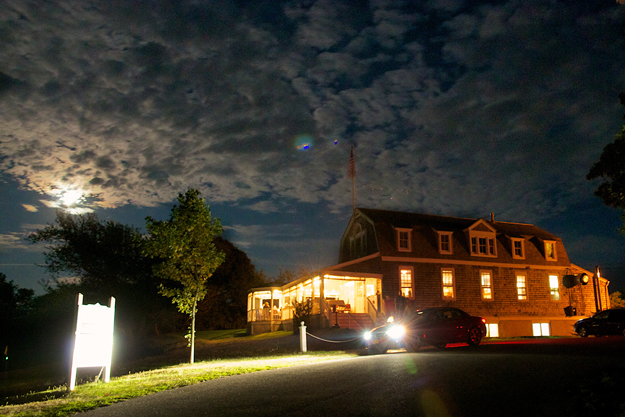 Two new members — Mary Fran Gleason and Peg DiOrio — have been appointed to complete the 15-member Board... Amazing. No other word can describe it. “The way this island comes together,” Kim Cannon said. “This is just...