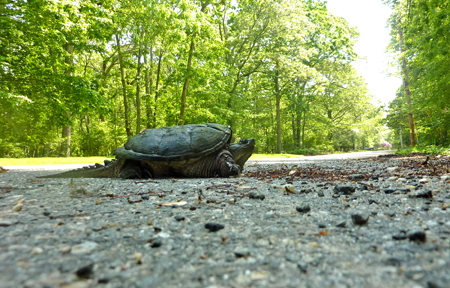 You’ve seen the signs for deer crossings but probably few have noticed similar signs for turtle crossings. That troubles Alex Ypsilanti, 55, a Shelter Island part-timer from New York City who is determined to protect what he called “the most endearing of all forms of wildlife.”

With so many creeks, coves and ponds, Shelter Island is prime habitat for turtles. It’s crisscrossed by wandering turtles, especially on wet days at this time of year.

Turtles have survived eons on earth but face threats today that could wipe them out, Mr. Ypsilanti said. The greatest killer is man with his vehicles and even his lawn mowers, he said. Turtle survival rates are “really low” everywhere, with only one in 200 getting to the reproductive stage, he said.

It’s hard to say what the turtle population is today but every time a turtle is hit — especially if it’s a female carrying eggs — drivers are wiping out future generations, according to Mr. Ypsilanti.

On Shelter Island, Mr. Ypsilanti is finding a lot of baby turtles, giving him some hope that the survival rate is better here. But it’s still “turtles versus combustibles” because few drivers are alert to their presence, he believes.

Their dark, greenish coloring camouflages them from predators but it makes them hard to see even on a blacktop roadway until it’s too late, Mr. Ypsilanti said.

Box turtles and snapping turtles that cross roadways en route to water are very susceptible to getting hit, he said. And that’s why he would like a greater proliferation of signs around the Island alerting people to their presence.

There are a few signs on Brander Parkway that he worked with then-Highway Superintendent Mark Ketcham to see posted, Mr. Ypsilanti said. But he said there should be more. He’d like to enlist local students to come up with more signs.

June is a particularly dangerous month when turtles are laying eggs. Because it’s often a rainy month, it brings out more insects on which the turtles feed. The turtles are comfortable moving around in the rain and are more likely to be found crossing roadways on rainy spring days, he said.

Mr. Ypsilanti offered a number of suggestions for Islanders concerned with turtle conservation:

• Drive slowly and watch for turtles in the roadways. Don’t try to redirect them. Avoid them and let them continue on their way.

• When mowing the lawn, be alert. There may be turtles (not to mention frogs and toads) in your path.

• Check window wells to ensure that turtles haven’t fallen in and become trapped. Trapped turtles become dehydrated and die. Move them to an area where there is water.

• If you have a swimming pool, place a small ramp in the lower end to allow turtles, mice and other small animals to escape should they fall in the water.

• Create small leaf piles in a corner of your yard that will provide turtles a comfortable place to thrive. Turtles naturally seek graded slopes.

• Incubate turtle eggs that have been exposed in road hits and release them into a safe area near where they were found.

• If you encounter an injured turtle, Turtle Rescue of the Hamptons Inc. will assist in trying to save it. The rescuers can be reached at 779-3737.

“There’s a lot of opportunities for us to be thoughtful stewards,” Mr. Ypsilanti said. “Conservation is a luxury we should behold for our children’s sake,” he said. “If we care for them today, they’ll be around for tomorrow,” he said.