Flutist Michael Kendrot played rising and falling notes, preparing for a congregation that would fill the church with prayers, hymns and speakers remembering Reverend Wancura, only the second recorded victim of a homicide in Shelter Island’s more than 350-year history.

Father Charles McCarron, pastor of St. Mary’s, stood in the center aisle of the church before leaving to dress in his vestments to begin the service. He spoke about his 87-year-old colleague and friend, who died in Stony Brook University Hospital on April 16, a month after suffering wounds inflicted during a home invasion and burglary in his Silver Beach residence.

He had been left alone, bound by his wrists, for more than two days.

Asked before the service if this was a sad day, Father McCarron said it was not, since “Paul is now where he hoped to be all his life.”

Behind him at the edge of the sanctuary was a large photo of Reverend Wancura and a tall flickering candle rising from a bouquet of spring flowers.

“This will be a remembrance and a chance for Islanders to pray and have some peace,” the pastor said.

INNOCENCE SHATTERED
Father Peter DeSanctis, pastor of Our Lady of the Isle Church, seated in a pew, said the service would memorialize his friend and the work of a fine man who helped others. The service would also “build the confidence of all Islanders that there will be a swift resolution” in the homicide case still under investigation,” Father DeSanctis said.

With the memorial gathering and other public acknowledgments of Reverend Wancura’s death, more information will be revealed, he added. “Someone knows something,” Father DeSanctis said, that they might not realize is relevant to the investigation.

Reverend Wancura was interred in the cemetery of the Caroline Church of Brookhaven in Setauket on April 23, where he had served as pastor for close to three decades. He was laid to rest alongside his wife, Helena, who died in 2007.
Father McCarron discovered his friend at his Oak Tree Lane residence midday on March 19 after checking on him.

The elderly minister had missed Sunday services at a church in West Islip the day before where he assisted most weekends. Father Wancura was found lying between a bed and a bedroom wall.

Airlifted to the hospital, he was in the intensive care unit for almost a month before his death. His left hand had been amputated from the injuries he suffered. A visitor to the hospital, a veteran of Vietnam, said he had never seen such serious wounds since his service in the war.

Reverend Wancura’s spirit was strong, however, and his sense of humor never wavered, his long-time friend, Twoey Brayson, told the standing room-only congregation. “I said to him, ‘You’re a tough old bird,’” Mr. Brayson said from the pulpit. “And Paul looked at me and said, ‘Tweet, tweet.’”

He recalled last Christmas Eve when they had attended services together at St. Mary’s and then went to the Brayson’s home on Hudson Avenue. A family Christmas tradition was baking and icing a cake. Mr. Brayson remembered his friend holding a tube of blue icing, “Waiting, and the 12-year-old in Paul was all aglow to ice the cake.”

It was an unusual Christmas Eve for Reverend Wancura since he was normally preaching or assisting in services around Long Island, Mr. Brayson said. He was known as “Padre Pablo,” because of his services to Spanish-speaking congregations, Mr. Brayson said.

An Episcopal arch deacon of Suffolk County, Reverend Wancura served in many roles throughout the Diocese of Long Island, including serving at the Church of the Holy Trinity in Greenport for a decade. He was a graduate of Queens College and the Columbia University Graduate School of Business Administration and held a Masters of Divinity degree from the General Theological Seminary in New York City.

He had also served with the U.S. Army Counterintelligence Corps in Austria and France before finding his vocation in the Episcopal priesthood.

The attack on the elderly minister and his subsequent death has “shattered the innocence of Shelter Island,” said Supervisor Gary Gerth in his remarks at the service.

Mr. Gerth noted that since Reverend Wancura was found, the town has been in constant touch with daily check ups on the 57 elderly Islanders who are living alone. “We are a strong people,” the supervisor said, and he urged residents to “be vigilant.”

LESSONS ON LIVING AND DYING
Reverend Wancura met his wife, Helena, at St. Mary’s, when she was a parish administrator. “They fell in love,” Mr. Brayson said. “Their union was one of graciousness and full of love.”

His friend had “a keen intellect,” was versed in history and theology, “liked to dance, sing, and a good cigar and a wee dram of Scotch. He was still a student,” Mr. Brayson said, “He never acted old.”

He ended his eulogy by speaking of his friend’s “courage and zest for life. That’s why I love Paul Wancura.”

Reverend Thomas Charls praised his friend’s — “for almost half my life” — pastoral work. On that theme, Father DeSanctis read from the Book of John, where Jesus tells his apostle, Peter, that if he loves him he will carefully tend his flock.

Betsy Pollert, a parishioner at the Caroline Church told the congregation that Reverend Wancura took that Bible passage to heart as a minister. “He was someone you could learn from. He gave you a message you could take away on how to live, ” Ms. Pollert said. Her voice catching with emotion, she finished by saying, “And he taught us how to be at the end of our lives.”

The service finished with the voices of the congregation filling the church singing the hymn “For All the Saints.”

“And when the strife is fierce, the warfare long,/steals on the ear the distant triumph song/and hearts are brave, again, and arms are strong.” Louie the Clip will be back in business; Gov’s Phase 2 allows outdoor dining, barbershops, hair salons

Louis and Anita Cicero returned from Florida to Shelter Island in the middle of last month. A barber on... 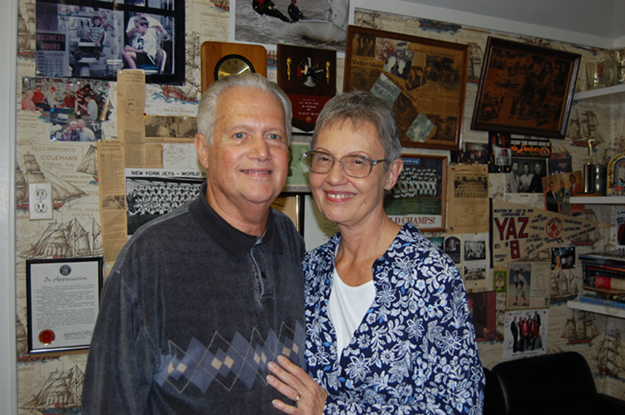