Father Peter DeSanctis is still saying Mass these days at Our Lady of the Isle.

But he’s the only person in the church, and it is often in the wee hours.

“I get up at three in the morning sometimes and say Mass,” Father DeSanctis said.

All services for the three main religious congregations on the Island — St. Mary’s Episcopal Church, Shelter Island Presbyterian Church and Our Lady of the Isle — have been cancelled for the near future to put in effect social distancing to protect parishioners from the COVID-19 coronavirus.

When Father DeSanctis was notified by his diocese that all services would be canceled for “Easter week, and Easter Sunday, my head was spinning,” the pastor said, adding that the holiest season of Christianity would have to be celebrated privately.

But the church is unlocked, Father DeSanctis said, “so people can have private prayer.”

He noted that it’s not just older parishioners who have been affected. “A young person told me that it was ‘heartbreaking’ that these were the new rules,” he said.

In counseling his parishioners, Father DeSanctis said that prayer, perseverance and acts of charity are the best weapons against uncertainty and despair.

He also mentioned that the Catholic Faith Network on Channel 29, and the Eternal Word Network on Channel 135, which bring Masses, rosary prayers and the Stations of the Cross, are valuable resources for Catholics to stay connected to their faith and the wisdom it provides.

Reverend Robert Griffin, pastor of Shelter Island Presbyterian Church, said cancellations of all services and events will be in effect through March 29, but will be reevaluated before or on that date.

Reverend Griffin said he had been hearing “a lot of fear, insecurity and anxiety” because of the health crisis. “It has run the gamut from less fearful to very fearful,” he said.

His role during these extraordinary times is to act in the same way he does for most situations when parishioners, or anyone for that matter, comes to him for counseling.

“I put it into a Gospel perspective,” Reverend Griffin said. “God is working through this, with us. We shouldn’t ask the question— ‘Why is this happening?’ Or say it’s some kind of reaction that a sinful world is the cause of this. That’s way off base.”

The church’s leadership is working with anyone who needs help, he added, whether for food, transportation or information.

He noted that for the first time in memory, Shelter Islanders, all Americans, and the people of the whole world are sharing the same thing at the same time.

“There is a unifying aspect that should be taken advantage of,” Reverend Griffin said.

Father Charles McCarron, pastor of St. Mary’s Episcopal Church, admits this new world, which everyone has been thrust into, brought him down recently. The cancelations of St. Mary’s for services was difficult, but  understandable, he said, but then word came that churches were to be locked at all times.

“Like Roman Catholics, we’re a hierarchical church, and the order came down from the diocese to lock the doors,” the pastor said.

The church is far from closed, however, he added, since “for a little place we have an excellent website.”

He praised the church’s webmaster, Roz Dimon, for her tireless and professional work, which brings recorded music and services, plus a host of information.

The church also has a YouTube site for services and a Zoom account. “We had our first Bible study on Zoom on Friday,” Father McCarron said.

Episcopalian services always have a social time after services, the pastor said, usually for coffee, cake and conversation. “Some congregations have full meals,” he added. “Socializing is so important to us,” and the use of technology is helping to fill a need.

Father McCarron also sends the week’s scripture studies via email to all parishioners.

Asked how he counsels those who have fallen into despair, he spoke of hearing a news report of a woman in England in a nursing home on her 100th birthday, and how her family came and stood outside her window, holding up a cake and signs, singing “Happy Birthday.”

Father McCarron said that, when asked for comment by a reporter, “The old lady said, ‘The grass was green. The trees were green. And I was green.’”

A scholar of the medieval era, the pastor mentioned St. Hildegard, a 10th  century writer, musician and scholar, who spoke of the “greening power of God that always comes through. We see it all around us. Creation. I see it in gardens now. In seeds, in people’s attraction to each other. And people arriving  from the city again. So when I was sad at locking the church, I remembered that idea, and that woman in England saying, ‘I was green.’” 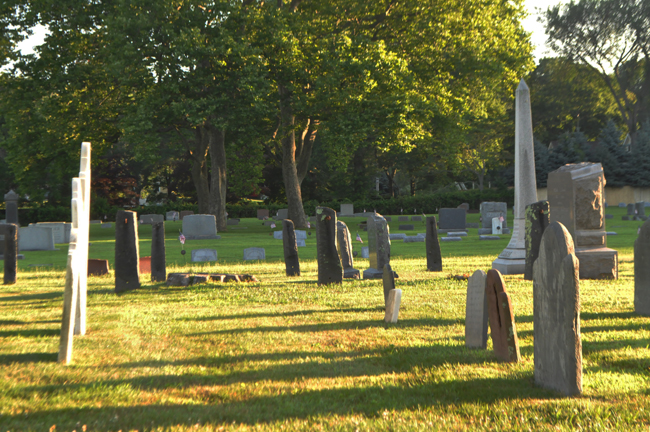